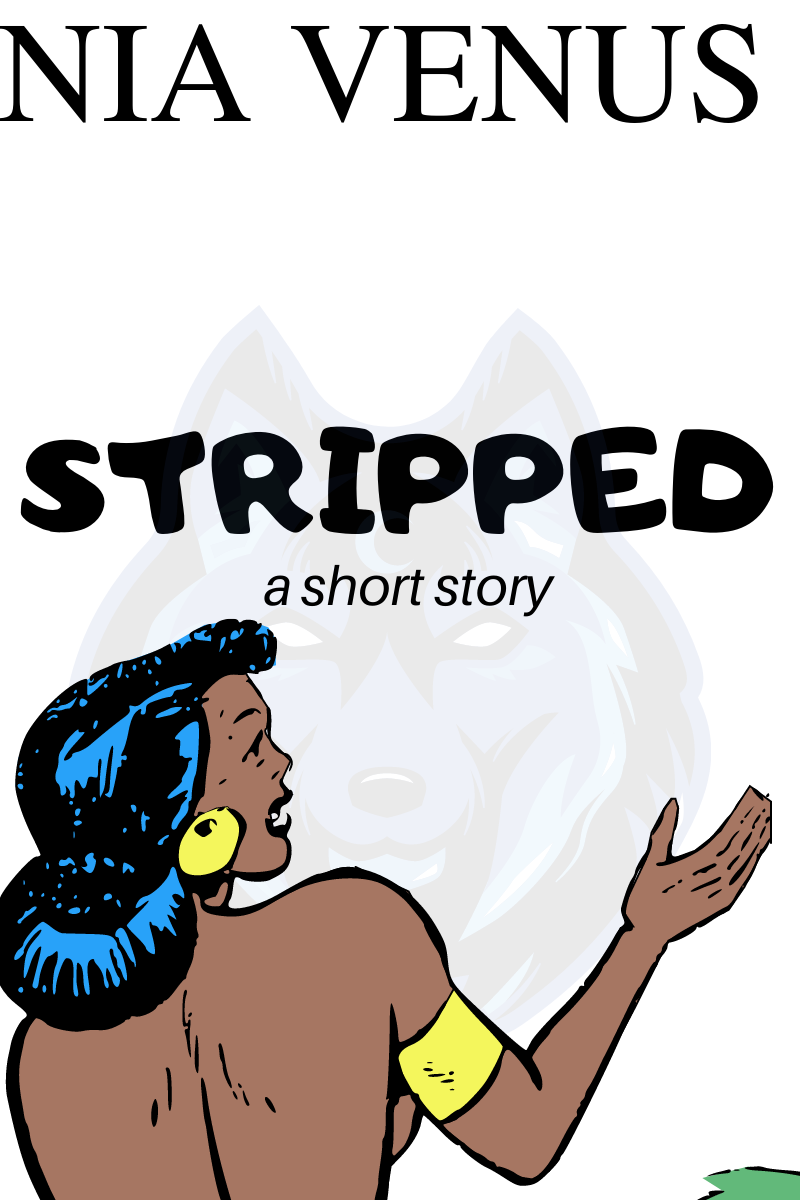 I had been dating Sly for some time now. It was time for me to benefit from it. In ways other than werewolf penis on demand. I arose from his lap and opened the blinds to reveal the glossy full moon.

His cocoa skin grew long furry hair as he morphed into his wolf. His sharp teeth dug into my neck, and as usual, I enjoyed it. After he pounded me out to climax and turned back into his human form, I gazed in his eyes to ask a question I had been dying to ask.

“Hey babe, I was wondering,” I fixed my gold halter top and pushed my bangs out of my face.

His dark eyes pierced me the way they did whenever he was on edge. Why is he on edge right now? We locked eyes for a few seconds.

My heart sped up. I stroked his short, curly hair and inhaled his peppermint shampoo.

“Sly, I know I’ve told you this before, but I’m tired of dancing.  When can I quit my dancer role and start training the others?”

He straightened his tie, raised his eyebrow at me and cleared his throat. “You’re fine in the position you’re in, Diamond.. We discussed this already…you’re a knockout and our clients love you…they pay more for you and that’s great for our business.”

But that was just it. It didn’t feel like our business. It felt like his. I nodded and danced my eyes around the office. My mind wouldn’t stop wandering. Maybe like I originally thought, it wasn’t wise to start dating the owner of the strip club where I worked. Even though I was a manager too, maybe me being a dancer made it too hard for him to see me as anything else.

A pink perfume bottle sat at the corner of the desk. Sly eyed the bottle quickly and shifted uneasily in his seat. That bottle most definitely wasn’t mine. What was he hiding?

“Don’t worry,Diamond. You will get your leadership role soon enough. It’s just not time yet.”

I crossed my arms. “You’ve been saying that for years, Sly. I’m ready to train. I can’t be a sex symbol forever. ”

His eyes studied my breasts, then coasted down my hips. “Says who?”

I smiled. “Stop playin. You know what I mean.”

His kinky hair shook as if he was about to shift into his wolf. “Diamond—I need you to trust me. Let’s not try to fix something that is working just fine.”

I stormed out of the office to keep from getting more upset.

To my right I saw Erica, a brand new dancer, looked at me as she twerked her ass on one of my regulars, Stan.

Stan yelled out to me between sips of his beer. “This one here,” he pointed at Erica, “she’s good just like you, Diamond. The similarity is astonishing.”

“Is that right?” I smiled at him. I hated when my regulars compared new talent to me.

The song stopped and Stan handed her a thick stack of hundreds. My eyes widened. Damn. Stan must have been feeling good tonight.

Erica looked up at me after she placed the crisp stack of bills into her glitter  top. She sauntered over, snaking her hips to the rap music playing. The giddy smile on her face gleamed as if she thought we were the best of friends. She put her hand on my shoulder. “Hey Diamond, girl! You done talking to Sly?”

I folded my arms. “Why?” I knew Sly was her boss, but so was I. She seemed way too hurried to talk to my man.

The smell of cotton candy and rose flowed from her breath so I waved the stench away with my hand. Erica seemed intoxicated, but not from alcohol. She didn’t drink.

I shoved her hand from my shoulder and she wrinkled her eyebrows in confusion.

“Hierarchy,” I said. “I’m your manager. Now tell me again—why do you need to speak to Sly so bad?”

“My bad, Diamond,” she slurred. “But Sly has this magic drink he makes—and it gives me wings. Real ones, not that bull drink.”

Words flowed out of her like a stream. She was geeked up on something, for sure. Her eyes spread out wide as she continued. “Whenever I drink it I have supreme confidence, and I make supreme money!”

“How long have you been drinking this—stuff?” I said.

“Umm—a few months. All the girls are drinking it. Profits are through the roof! Sly charges us a grip for it but we get it right back.”

“Thanks, Erica,” I said. Clenching my back teeth, I stomped my heels back towards the office. What the hell was Sly up to?

He wasn’t in there, but that pink bottle behind his desk called to me. I took a whiff of it. Just like I thought, it was what was on Erica’s breath. A concoction of my favorite fragrances.  What the hell is this stuff?

I drank the bottle down completely and I felt a high like no other. It was way better than any energy drink I’d ever had, and it worked faster. I rushed out to the dance floor and completed 200 lap dances and still had lots of energy left.

Sly ran over to me.

“What’s gotten into you?” He asked.

I grabbed the pink bottle and he shivered.

“I know what the fuck it is, Sly. You were preserving my sexual energy and selling it to these other dancers. What the hell!” I screamed. My fist lunges into his right arm and he let out a low groan, and then a laugh.

“How about we co-own the club now?” He whispered, rubbing my shoulder.

“Fuck that. I have a lawyer. We’re getting into the energy drink business. And I’m the owner of this club, now.”

Sly wrapped his arms around me. “God, woman. You’re sexy when you take control.”

“I should be, I learned it from you.” We both laughed.

Thank you for reading! Check out more of my juicy romance below: